Water is an Important Necessity

WATER: Water must be made available at all times. Here are some photos of water containers, ranging from kiddie wading pools to water tanks purchased from the feed store. 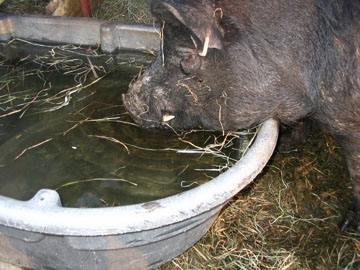 FEED: While most breeders keep their Guinea Hogs on pasture, and Guinea Hogs are renowned for being grazers and enjoying grass, most breeders also supplement their diet with other feeds, either purchased-in specifically, or left-overs from the kitchen, or some combination of both. Some breeders feed once a day after the pigs have browsed all day, and other breeders feed twice a day. Most or all breeders provide grass hay during winter, or when there is no pasture.

There are a variety of feeding systems or styles, none “better” than the other, but merely a matter of personal preference on the part of the breeder. Various feeding systems, in no particular order:

While there are as many different feeding regimes as there are farmers, they have one thing in common; these pigs live primarily on pasture and/or hay, and get supplemented with what the farmer has on hand or prefers to buy in.